The Last of Us is undoubtedly one of PlayStation’s greatest and most influential games. The original PS3 game, released in 2013, shook the gaming industry with developer Naughty Dog’s masterful splicing of narrative and simple gameplay, showing that video games can also tell powerful stories with intriguing characters. The game’s sequel, The Last of Us Part II, did the same once again towards the tail end of the PS4 generation, but to divisive results. So, where can Naughty Dog go from there? A remake of the original game for seemingly multiple reasons. For starters, it’s one way to hopefully win back some of the fans the studio lost with Part 2, and it’s a good idea to update the original game with new assets and art direction to keep it more in line with the highly iterative sequel. However, the gaming industry is not welcoming of the new remake, citing it as either a waste of development resources and time or an unnecessary endeavour given the original game’s existing PS4 remaster.

I’ll keep it straight and simple — The Last of Us Part 1 is a great game, but the optics around it aren’t. The remake is being sold at a premium $70/Rs. 4,999 price point, with the amount and quality of content, included being questionable in terms of being worth that price point. The promised PC version of the game is also not here yet, with Sony not revealing any details about its release or extra features. If you’ve never played The Last of Us, this remake will be, going forward, the definitive way to experience Joel and Ellie’s adventure. If you have played the original game on either PS3 or PS4, then you’ll probably want to wait for a steep discount to get the enhanced experience.

Here’s what you get with Part 1:

The Last of Us Part 1 is the definitive version of Naughty Dog’s masterpiece. The visual and QoL improvements are breathtaking, but the relative lack of changes to the core gameplay design is a little underwhelming, especially for the premium asking price. pic.twitter.com/5gFonwxYDn

The new remake’s most glaring improvement is the graphical glow-up— characters, lighting, animations, and the entire art design of the game gets a massive bump in fidelity over its PS3/PS4 counterpart. The game is pretty much “what if they remade TLoU but in the TLoU 2 engine/graphics pipeline?.” While changes to character designs will obviously be subjective, the remake, in my eyes, is leaps and bounds better than the original. Of course, I’ll always have a special place in my heart for the original, it being a show of power for the ageing PS3 at the time. I hope PlayStation doesn’t follow in the footsteps of other publishers like Rockstar in de-listing the original versions of the game. My PS4 disk already gave up on me, so maybe that’s a sign?

Don’t worry, the game’s narrative and scene direction remain precisely the same, barring some minor adjustments to camera positions due to the difference in character proportions this time. The enhanced lighting also gives scenes a different look, and it reflects the grim world of The Last of Us much better while getting it closer to the world presented in its sequel. The remake is baked with a more natural colour palette, with some brilliant use of shadows and light leaks in intense areas. It looks significantly better in HDR, which I highly suggest if you do have a compatible display. 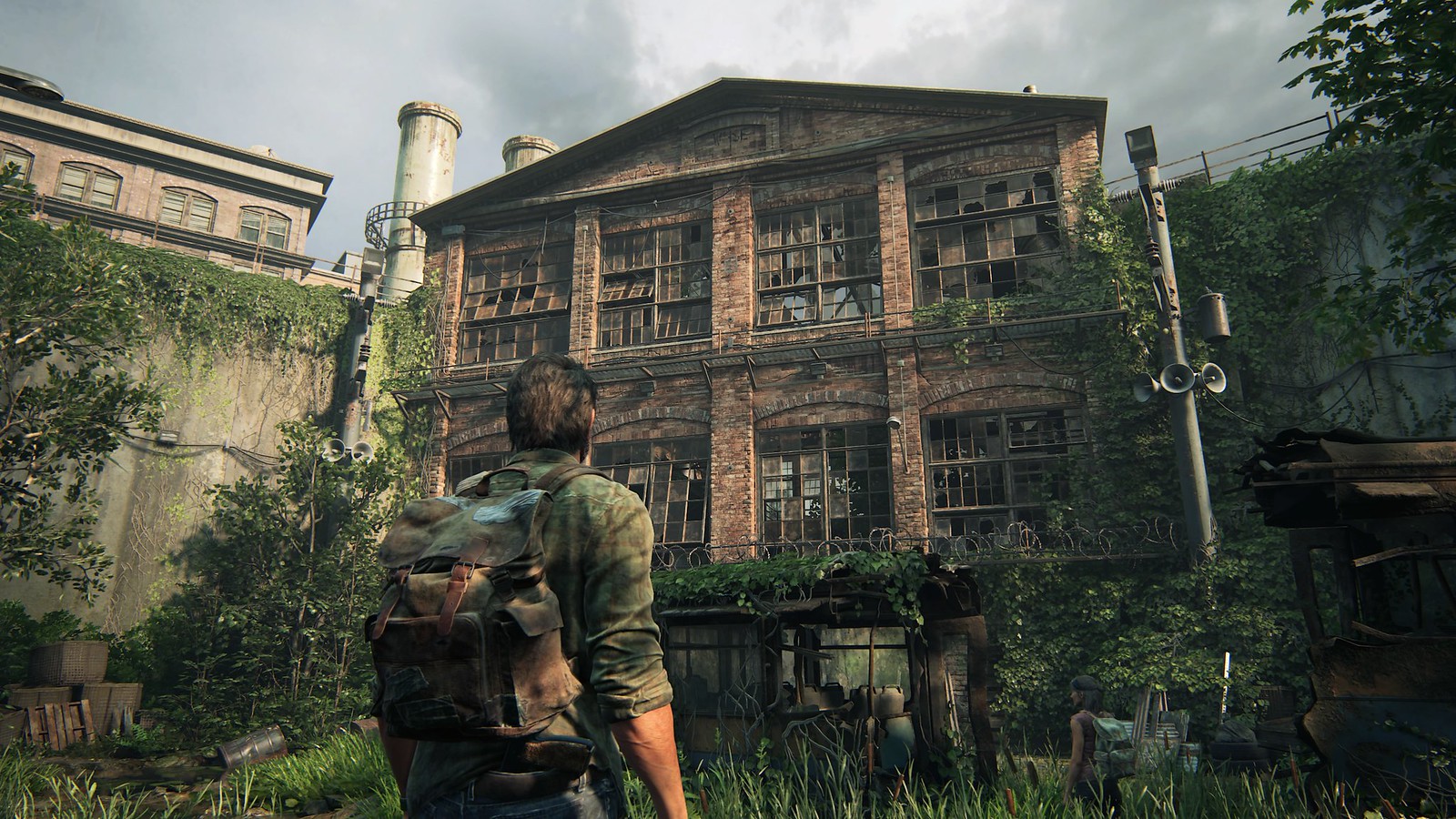 One thing is very clear — this is by no means a “lazy” remake as internet detractors would have you believe. While I would rather have Naughty Dog’s employees spend their time working on a new project, it doesn’t mean that a significant amount of work has gone into this project. The problem is that since the first game just came out under a decade ago, and because we just played TLoU 2 a couple of years ago, I kind of retroactively pictured the first game to look better than it did. In my mind’s eye, The Last of Us on PS4 looked closer to its actual remake than it did to the original PS3 game. Seeing those images produced in real-time makes it seem like the changes aren’t massive, but you need only take one look at the side-by-side images (linked above) and gameplay videos to know better.

Another aspect of the remake that I suspect fewer gamers will appreciate is the sound design. We’ve all heard a lot about the PlayStation 5’s 3D audio, and it is employed to significant effect here. Using a good pair of headphones enhances everything around you, and those tense moments of hide-and-kill with clickers, bloaters, and good old humans get a lot better than if you were playing with regular TV speakers.

Naughty Dog shocked everybody in the gaming industry with its suite of accessibility options in The Last of Us Part 2, and the same can be said for the new remake. While I am fortunate enough not to have the need to use these features extensively, they are a welcome addition. I did enable some of the ‘smaller’ features such as ‘auto-pickup’ and ‘skip puzzle’ options. For many, the remake’s high asking price will be worth it simply due to the addition of these features, and I can’t argue against that.

The Last of Us Part 1 — Performance Review

I played the entire game in its regular ‘Performance mode’ — dynamic 4K at 60fps. Not once did I encounter, or at the very least perceive any frame drops. The gameplay remained perfectly smooth even during the most intense encounters, which is to be expected from a Naughty Dog game. I tried playing in the ‘Quality mode’ for a while, but my eyes could not adjust to the 30fps presentation, which can look better when you dial in the appropriate post-processing effects like motion blur and film grain. I remember TLoU Part 2 looking extremely smooth at 30fps on my base PS4 due to some of those post-process effects, so the same applies here.

There is one problem, though — if 120Hz is enabled in console settings, the game will launch in a 120Hz container only, regardless of being set in ‘performance’ or ‘quality’ mode. So for HDMI 2.0 TVs, like mine, if 120Hz is enabled in console settings, the game launches in a 1080p 120hz container. On top of that, my LGUM7300 TV does not support VRR, meaning, by extension, I couldn’t access the game’s unlocked frame-rate mode. In quality mode, the game targets 40fps when 120Hz is enabled, but due to my TV’s HDMI spec, I’m locked to playing at 1080p in that mode. Unless PlayStation and Naughty Dog enable that 1440p resolution support, I’ll have to make do with 1080p to play at 40fps in the quality mode. Does that sound confusing? Because it is. Essentially, if you don’t have an HDMI 2.1 enabled display, turn off 120 Hz in the PS5’s console settings to play at 4K.

Here’s a simple solution Naughty Dog could patch in — add a manual 120Hz mode toggle in the settings. That way, the game can launch in a normal 4K container by default, and players can choose to enable either the 40fps mode or unlocked fps mode without being locked into a 1080p container on older TVs.

So with performance being rock solid, what about the gameplay? This is a remake, after all, so are there any significant changes in the way you play? Well, to put it bluntly — no. None of the gameplay improvements from Part 2, such as manual jump, going prone, or dodging attacks, have made it to Part 1. Naughty Dog, however, has claimed that significant improvements to enemy AI are present, and I think that’s true. I didn’t alternate between playing the remake and the original game, so I can’t really tell you if the improvement is that drastic. I can tell you that, yes, enemies behave like you would expect them to, perhaps not as smart in TLoU 2, but smarter than their previous counterparts.

Speaking of things that make little sense — PS5 exclusivity. Yeah, I know that the game is also slated to come to PC sometime soon, but on the console side, it has been marketed as being “built from the ground-up” for PS5. Do you want my honest thoughts? I call BS on that. While the quality of life features such as DualSense haptics and increased framerate is a result of the PS5’s hardware, the bump in graphical fidelity, honestly, probably could have been achieved on the PS4. Of course, the level of detail would have to be dialled back, but I can’t imagine that a somewhat downscaled version of this remake can’t exist on the PS4 or PS4 Pro, especially given the existence of Part 2 on the older console. To that end, yes, the remake does, in fact, look better than Part 2, with character designs getting some enhancements as shown below:

Being a PS5 exclusive also means a host of other benefits, such as fast loading, either directly or through activity cards, as well as Game Help cards that should go live when the game releases. I played the game on an external M.2 SSD (the Crucial P5 Plus), where load times were as follows:

The new permadeath and speedrun modes should provide plenty of replay value to gamers who are into those, which I’m not. It is fun to use some of the unlockable skins, as seeing something goofy like a Daxter backpack on Ellie during serious moments can provide plenty of laughs once you’re done with the game.

The Last of Us Part 1 is the definitive version of Naughty Dog’s masterpiece. The improvement in graphical fidelity is undoubtedly breathtaking, along with the quality-of-life improvements across the board, but the relative lack of changes to the core gameplay design is a little underwhelming, especially for the premium asking price for returning players.

Marvel's Spider-Man on PC Swings Higher Than Ever