The PC Port of Marvel’s Spider-Man Remastered is another strong addition to PlayStation’s new venture. The Insomniac Games’ developed franchise starring the friendly neighborhood wall-crawler has quickly risen to become PlayStation’s best-selling exclusive and, now 4 years out from release, is getting new life with an unlocked potential on PC. Marvel’s Spider-Man marks the fourth major first-party PlayStation exclusive to come to PC, following Horizon Zero Dawn, Days Gone, and of course, God of War.

Bringing a console game to PC always has its fair share of potential problems, some of which were highlighted quite well with Horizon Zero Dawn’s rocky port. Fortunately, Marvel’s Spider-Man is an excellent port that scales well across PC hardware along with offering better graphical and quality-of-life options to PC players over its PS4/PS5 counterparts. It shows that Sony’s strategic investment into Nixxes Software, which previously handled PC ports of Square Enix games, has started to pay off incredibly well.

There are a lot of new additions to Peter Parker’s adventure on PC, but to understand the full potential of the changes, we need to go back. Let’s start with the basics — Marvel’s Spider-Man was released in September 2018 on the PlayStation 4 and PS4 Pro platforms. The open-world action-adventure game targets a locked 30fps on both platforms, albeit at different resolutions. The PS4 version was rendered at 1080p, while the PS4 Pro version targeted a dynamic 4K resolution. The original game didn’t include fancy features such as ray tracing, although it employed Insomniac’s ‘temporal-injection’ technique for image reconstruction/upscaling.

Two years later, the game got remastered for PlayStation 5, simultaneously with the release of Marvel’s Spider-Man: Miles Morales. The remaster included higher levels of detail, graphical upgrades, and for the first time: ray traced reflections. The remaster, along with Miles Morales, targets 3 performance modes on the PS5: 4K at 30fps with ray tracing, dynamic 4K at 60fps, and dynamic 4K at 60fps with ray tracing. However, subsequent updates to the game have also included new performance profiles such as an unlocked frame rate mode and support for 40fps while running in a 120Hz container.

The PC version of the game knocks past all of those limitations, now offering full customization to play at any frame rate or resolution gamers desire. Crucially, the PC port includes toggles for different levels of ray tracing detail, along with supporting all three image reconstruction/upscaling techniques: NVIDIA’s Deep-Learning Super Sampling (DLSS), AMD’s FidelityFX Super Resolution (FSR) and Insomniac Games’ Temporal Injection (IGTI). It’s a similar case as God of War, albeit with ray tracing_,_ but I do miss the lack of options for changing aspect ratios directly.

Of course, being on PC means there’s plenty of room to have fun in the form of mods. It’s early days for the wall-crawler’s PC adventures, but some cool mods have already reared their heads, such as the ability to play as Spider-Man co-creator Stan Lee. Graphical mods such as reshade presets are also available on NexusMods, and I can’t wait to see what else awaits PC gamers who have been so patient with the port.

Back when the game came out on PS4, I often wondered how it would play with a keyboard and mouse. While some games on PlayStation consoles offer KBM support natively (e.g Fortnite, Call of Duty), the Spider-Man games never did. Thus, I’ve been playing the new port exclusively the way PCMR wants me to with the superior control layout. The result? Spider-Man’s default keyboard mapping plays surprisingly well, although it probably should’ve shipped with some changes — key among them being holding ‘Shift’ for running/swinging. Given that it’s an activity you’ll be doing pretty much all the time in the game, it can put quite the strain on your pinky with the default control. I changed that to the right-mouse button, which was mapped to the ‘aim’ function. In Spider-Man, you rarely need to use the manual aim, so that was, on top of being better, an easy choice. Certain other functions like ‘dodge’ being mapped to left control are fine, but I’m thankful for the default alternative, which is one of the extra buttons on the mouse.

Keyboard and mouse controls are fully customizable, so players can set up their desired inputs the way they want, and that’s always welcome. I will say that playing Marvel’s Spider-Man on PC with an Xbox controller feels like breaking some invisible rules of the gaming medium, but damn is it also fun! The Xbox wireless controller may not have the bells and whistles of the PS5’s DualSense controller, mainly the haptic feedback, but the built-in rumble gets the job done.

I played the game on my PC rigged with an Nvidia Geforce RTX 2060 Super and an AMD Ryzen 7 3700X CPU paired with 32 GB of RAM. Check out what the numbers say: 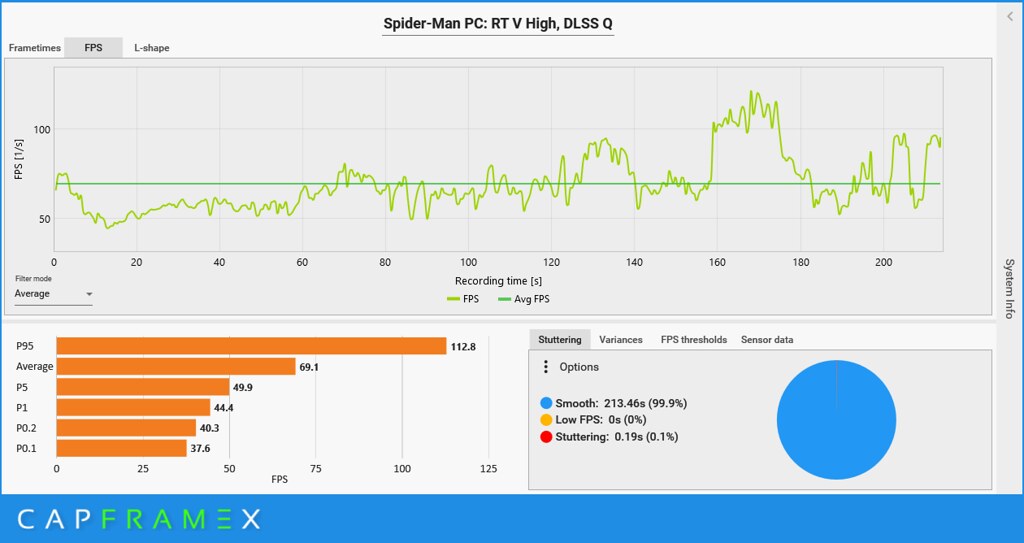 PC performance is really good, although there are some curious ‘anomalies’ relative to other games of similar style. Spider-Man on PC sees an enormously high CPU usage, and its GPU scaling isn’t as straight and easy as many would expect. I normally use my 2060 Super to play games at 1080p, where the extra GPU headroom for a card that’s meant for 1440p helps a lot in gaining more frames. However, in Spider-Man, I see no big benefit to doing so, as the extra 15–20 frames I did get were diminishing returns over 60fps. With a title like this, I’d want to play at either 60fps or something closer to 120fps, with ray tracing enabled where possible.

Getting the game running at 60fps with RT enabled on ‘High’ doesn’t take much work. In fact, you’d be fooled into thinking you need to enable DLSS/FSR at all while swinging through the city. It’s in the more intimate scenes, with particle effects and reflective surfaces around, that the impact is really noticeable.

Some #SpiderManPC impressions: it's a really well-optimised port. Ray tracing is within reach of modern GPUs at playable framerates without much compromise.

Swinging in New York City is just as fun as it was in the original game, but the added fidelity along with QoL options such as the FOV slider make it an even better sandbox. You can also toggle settings such as crowd density, character hair rendering, and general geometric detail in the ray-traced reflections to suit your needs.

While it may be that ray tracing quality is higher than that found in the PS5 version, I can’t help but notice it isn’t always clean to look at. Of course, part of this is due to how computationally expensive the feature is, but it’s also because I have never played the game sitting close to a monitor before. Most people who have played the game on PS4/PS5 will have played it on their TVs, sitting a comfortable distance away that helps in masking some of the graphical irregularities. That’s where Insomniac Games’ temporal injection helps in providing a clean image to the viewer. The same is harder on mid-range GPUs playing on a popular but cheap resolution like 1080p. The game, by default, is quite sharp to look at, but if you don’t have your setting dialed in correctly, it can sometimes look like a blurry mess. In that case, I suggest increasing the quality of upscaling or maybe turning off dynamic resolution scaling. Sure, the frame rate will get more variable, but at least Spidey will look shiny.

Marvel’s Spider-Man Remastered plays beautifully on PC, with scalable settings that offer visuals and performance beyond the PlayStation 5. The inclusion of top-of-the-line graphical features such as improved ray tracing, DLSS, FSR, IGTI, and customizable controls make it the definitive way to experience the game if you have the hardware for it. If not, you’ll still probably have a ton of fun swinging through New York and webbing up bad guys, thanks to great optimization efforts.

I can’t wait to check out Marvel’s Spider-Man: Miles Morales on PC when it releases later this year, and if this first swing is anything to go by, it too shall be a phenomenal experience.

The Last of Us Part 1 (Remake) Is Great, but Is It Worth the PS5 Premium?