Going into Bright Memory: Infinite, I was indeed quite excited seeing how gorgeous the visuals looked, with the gameplay looking crisp and responsive. Knowing that an extremely small team made it added another layer of anticipation that kept growing as I pressed “X” on the title screen and began to move forward. In many ways, Bright Memory Infinite was indeed a very fun and small adventure, but it was still held back by some uninspiring level design.

Note: The publisher provided a review code for review.

Developed by FYQD Personal Studio, Bright Memory: Infinite is a sequel to the game called Bright Memory. Playing as the character of Shelia, a Science Research Organization (SRO) agent, we are sent to an area to investigate a black hole that has randomly appeared in the sky. Dropped right into an area filled with a bunch of agents, what follows is a race against time as we do our best to make it to the given location.

Bright Memory Infinite’s story, in many ways, almost feels like an afterthought. With characters devoid of depth and mythological creatures that show up out of nowhere, I was often confused about what was going on here. However, you won’t care much about it, as gameplay is what you’re here for.

With Bright Memory Infinite being a straight-up first-person shooter, some neat elements are put in over here that really hold up its surprisingly short runtime quite well. With the game only being 90 minutes, you have a barrage of options at your disposal that helps make up your arsenal seem distinct.

Being deployed with an assault rifle with quite the impressive ammo counter, the game then goes on to give three other guns in the form of an automatic pistol, a sniper and a shotgun. Having the options of two different types of rounds for each gun, the switching between them provides for a great variety of approaches to combat.

That’s further bolstered by a sword at your disposal, which deserves a special shoutout. With the slash of it, that’s heightened by the haptic feedback of the Dualsense. Every hit feels impactful with a great sense of vibrations in your hand. 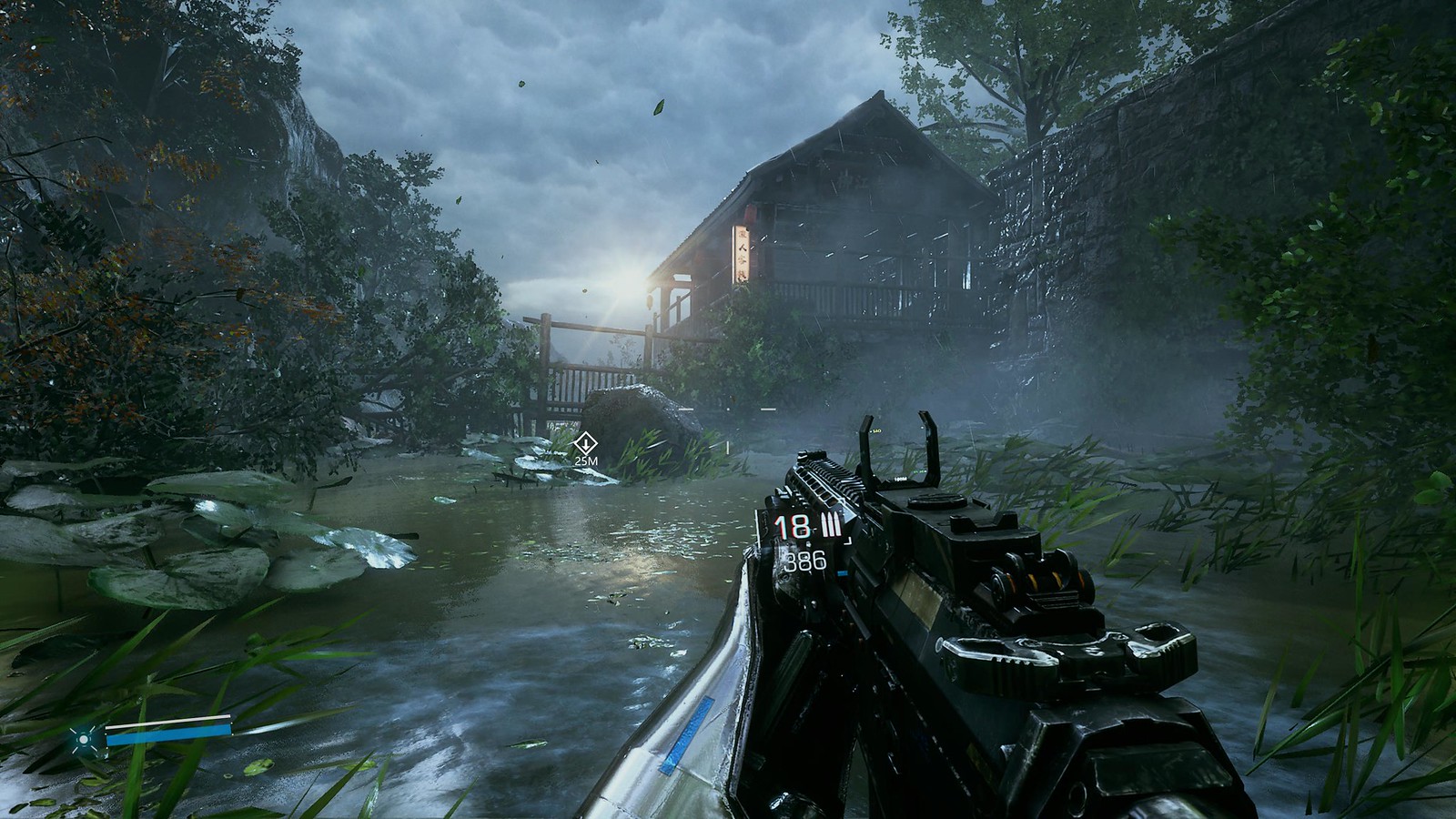 Talking about the Dualsense implementation, the work done here is fairly good. With the sword feeling impactful and the haptics making for an immersive experience, the guns themselves feel great to use. With the adaptive triggers fluttering at every shot, the gameplay itself felt very snappy and responsive in a way. However, I was slightly disappointed when I didn’t feel any tension on the L2 button when aiming.

On the other hand, you have a skill tree as well that’s divided into three sections. With each section focusing on a certain aspect, you can upgrade your weapons with a green relic found throughout the levels. A particular attack that turned every slash of my sword into a projectile made for a vertical experience that felt reminiscent of some high-profile shooters. The inspiration here seemed very clear.

The implementation itself can feel a bit of a letdown as the level design doesn’t let you experiment much. With Bright Memory Infinite feeling like a straight shooter, there are moments when it feels like it wants to be an arena shooter in the same vein as Doom and more. However, with how small the levels themselves feel, there is always a hint of disappointment with the encounters.

While the enemy variety also makes for a fun turn-up in combat, their AI is as dumb as rocks. With them walking right into your bullets, they feel more like a meat pinata than a trained soldier who can flank you. Thankfully the boss battles provide a good visual spectacle that often makes those parts of the game seem more fun.

Bright Memory Infinite is extremely well stabilized on the performance side of things. With the PS5 version of the game having two modes, you can switch between a high frame rate mode -that will punch up the game to 120fps if you have the required screen for it — or you can sacrifice that for 60fps that provides for some well-implemented ray tracing as well.

The environments themselves look quite breathtaking, with rain hitting the ground and water-based reflections being an absolute standout. But you can still see some of the limitations as clunky animations in cutscenes can make it look a bit dull given how stiff and mundane the character models themselves look too.

Bright Memory Infinite was a fun 90-minute experience that I enjoyed in many ways but still hoped there was a bit more to it. With an extremely snappy feel to its weapons and environments that are up there with some AAA games today, this team is bursting with potential. Here’s hoping their next game expands on this formula.