Video game movies have always been mostly terrible, with just a few examples that I can point to as being passable. One of the reasons for that is the very nature of the medium is hard to translate to a big (or small) screen experience, one which can be enjoyed passively. To that end, there are few franchises in the gaming world that are fit for live-action adaptations, and PlayStation developer Naughty Dog created two of the biggest ones — Uncharted and The Last of Us. Both games are well known for their cinematic qualities, often being regarded as “playable movies”, as the quality of writing and scene direction in both sees heavy influences from the world of cinema. While video game adaptations used to be terrible from the get-go, it seems like that era may just be over, with PlayStation Productions’ first foray into live-action, Uncharted, being a genuinely fun movie that can introduce the IP to a brand new audience.

I’ve been a huge fan of the Uncharted franchise, having played all 4 mainline games (sorry Golden Abyss!) and the last spinoff, The Lost Legacy. PlayStation just recently remastered the last two games in the franchise for the PS5 console, with one of them acting as the swansong for franchise lead Nathan Drake. To play that and go into the theatres to see a younger, less experienced Drake on-screen reenacting some of the franchise’s signature stunts in a bizarre, often joyous experience.

With all that said, I went in with extremely low expectations, and to my surprise, came out quite delighted. I wasn’t happy with the film as an adaptation of the game I love, but as a dumb, fun globe-trotting adventure that works just fine if you detach it from the source material. But should this behaviour be rewarded? Should PlayStation Productions (and Sony) be given a pass for using the name of a hit franchise, complete with its dedicated fans, and using all but the superficial elements from it to craft a movie that feels like the low-hanging fruit of loose ‘adaptations’?

Let’s get my primary concern out of the way first. Tom Holland brings great screen presence to the role, but as mentioned doesn’t quite live up to the Drake I know and love. While it’s clear that he has put the work in on his body and performing well-choreographed stunts, I just don’t see him as the charming and tough Drake. Part of that is down to the fact that the games used motion capture and excellent voice work from Nolan North, and while Holland may physically look like Nate at times, he doesn’t quite have the same voice, despite trying to alter his accent every once a while.

Marky Mark on the other hand is horribly miscast, although he does work in the move well if you disassociate him from the role. Holland is 10 times closer to Drake than Wahlberg is to Sully, which is a shame because the lead chemistry is palpable. There are occasional quips and moments of levity between Holland and Wahlberg, which brought a smile to my face before I reminded myself that these aren’t really the characters they’re supposed to be. The same goes for Sophia Ali’s Chloe, who is almost nothing like she is in the games, aside from donning similarly coloured clothes. There are fleeting moments between our central trio that resembles the great encounters they have in the games, but those are few and far between.

While we’re talking about the cast, I should also mention that Antonio Banderas’ Moncada is a comically flat villain, so much so that even the filmmakers realized he can’t be on the ride for the entirety of 116 minutes. That’s where Tati Gabrielle comes in as Jo Braddock, who for the most part plays the role of an annoying, yet momentously menacing foil to Drake. She too, unfortunately, falls prey to the weak script. 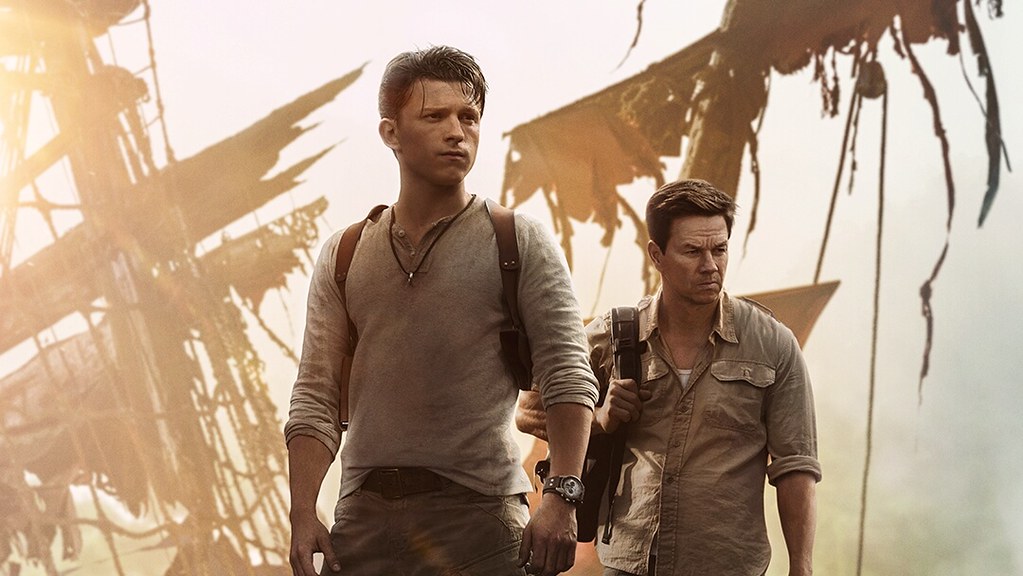 So, by lack of narrative dots to the source, am I saying this movie doesn’t have a heart? No, it does, which is the biggest surprise here! The film takes the central relationship between Nate and his brother Sam and makes that the core motivating factor for our young hero. Even though we never see Sam, we feel the loss of connection that Nate feels throughout the movie.

I’ve punched down enough on the cast of characters, but Uncharted is also well known for its over-the-top bombastic actions sequences, and the film delivers that in spades. From chase sequences to heists to exploring ancient ruins, an aeroplane sequence that is straight-up lifted from Uncharted 3: Drake’s Deception, and all the way to a frankly overly ridiculous final sequence on top of flying ships, it all had me excited to be watching on the big screen. This is a film filled with spectacle, and it’s always pretty well executed, with a couple of sequences that didn’t make me miss the games, and that’s a positive sign. Kudos to Fleischer, the stunt and visual effects team for making some immensely exciting sequences that help boost an otherwise stale story.

Note that if you are going in for the full ride, make sure to stay during the credits as there are two threads that, while obviously sequel-bait, are quite fun.

Uncharted is a fun movie that only has superficial connections to the great games it takes inspiration from. Tom Holland and Mark Wahlberg have good chemistry together working well with the generally good action sequences, even though they are far from the characters they’re supposed to be portraying. If you’re in for the action, go in and enjoy two hours of it, but if you’re in for a good PlayStation adaptation, maybe temper your expectations.

Horizon: Forbidden West on PS5 Is Bigger and Better in the Best Ways Possible