Horizon: Forbidden West is a shining example of what happens when a talented developer is given the proper time and resources to execute its vision for a great game, straddling the console generations and delivering an excellent experience on both the ageing PS4 and the new PS5 consoles. Guerrilla Games’ latest action RPG ranks among the premier league of PlayStation first-party games that delivers an unparalleled experience in production value, storytelling and captivating gameplay that transports the player to a world where one won’t mind spending countless hours marvelling at its beauty, culture, design and lore.

Forbidden West’s Story Is Way More Sci-Fi, and I Like It 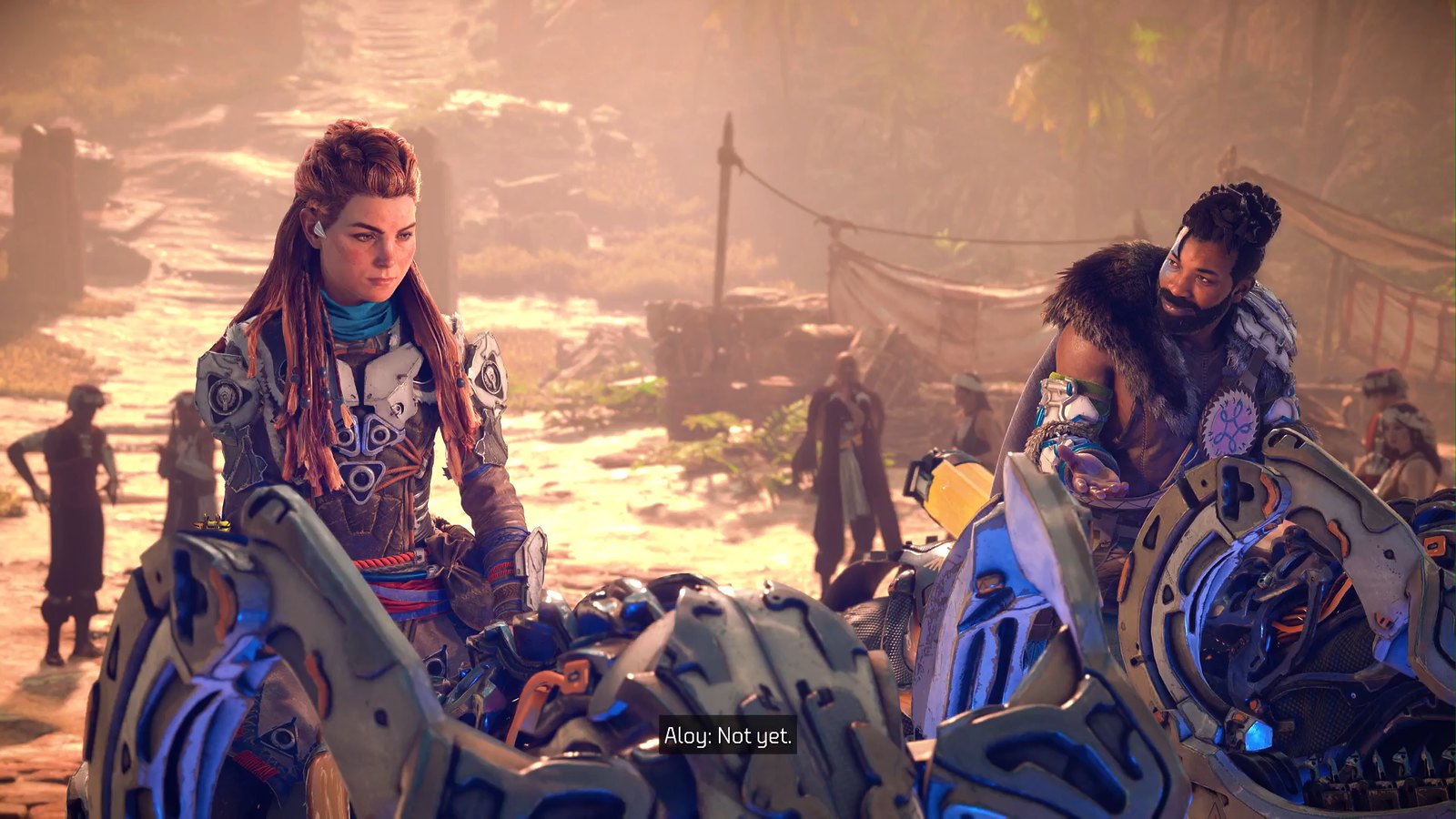 It has been five years since the first game, Horizon: Zero Dawn, was released so I can forgive anyone (including myself) for forgetting any of the core narrative elements in that game, including many of its secondary characters. While I remember the plot beats well, the different tribes and Aloy’s allies are lost on me. Thankfully, Forbidden West starts off with a neat recap video the first time you boot it, and even in the game’s early hours, you’re given plenty of blatant exposition from characters to get you up to speed.

Following the apparent defeat of HADES, a malevolent AI that sprung off from the much larger but defunct system GAIA, Aloy must travel uncharted territories to find and restore the latter in hopes of saving Earth from its doom. That’s what you’ll find on the back of the box, or something similar (I’ll order a physical steelbook when they’re back in stock), but that’s barely scratching the surface. For Horizon, Guerrilla has crafted a world so rich with new cultures that it’s hard to unpack it in one single paragraph. Like the first game, you’ll meet new faces, face new machines, make new friends and enemies, all the while traversing the conflicting political and ritual ideologies of the many different tribes that inhabit our far future. Fan-favourites like Sylens, Varl and Erend get more to do here, and the new characters that get introduced are so fantastic that I feel the writing team over at Guerrilla deserves more recognition.

The game starts pretty slow, but by the time I had crossed the 8-hour mark or so, a new twist emerged, one which instantly grabbed my attention and wouldn’t let me leave my comfortable bed for entire nights. Forbidden West explores more of everything that made Zero Dawn unique, including elements that people may not have been interested in. Unlike Assassin’s Creed, which shelved its modern-day segments because most of its player base didn’t engage with it, Horizon: Forbidden West explores even more of the Old World, bringing new revelations that I did not see coming. It gives fans of the tribal future and those of the technological past something new to chew on and makes it so that you won’t miss a beat should you choose to engage less with either element. That’s a big win in my book.

Of course, it’s not all perfect. The tried and tested trope of no one trusting the outsider leading to time-wasting errands, and side-quests remains, and it gets old pretty fast. There were many times when the larger story would get stopped in its tracks just for Aloy to go on yet another adventure to gain the trust of the new people she encounters, only adding more hours to the game’s total length without meaningfully moving the actual plot forward.

The resolution dip is quite noticeable on 4K TVs, especially on things like foliage. It's one of the few games where I switch between both regularly.#HorizonForbiddenWest pic.twitter.com/RWw1o0rfOR

The PlayStation 5 has been out for over a year but it’s hard to point to many games that truly show what the new hardware can do, thanks to an ongoing shortage that has forced us into a prolonged cross-gen period. While I have always been critical of the approach, usually hampering the potential of new games, developers have shown that straddling the two vastly different generations may not be a bad thing. Make no mistake, Forbidden West is a PS4 game, with no features locked to the new console. It builds on the foundation that Guerrilla built with its first open-world game and learns from the games that have come out since. The core gameplay loop takes cues from similar games, with its quest and world-building structure reminding me a lot of The Witcher 3: Wild Hunt, which remains quite possibly my favourite game of all time.

Throughout the game, you’ll be hunting machines, upgrading weapons, crafting potions, taking on contracts, exploring mysterious ruins, all the while stumbling upon wildly different biomes throughout its long main quest. Everything I mentioned here is taken from the first game but vastly expanded upon. Quests are much more profound, NPC interactions more lively thanks to actual scene direction, and gameplay has been refined to offer more flexibility to the player. More minor elements like your Focus, similar to Eagle vision/detective mode from other games, have also gotten an upgrade, and general traversal is way better here. The Decima engine has been upgraded and polished to a sheen, making world traversal much more enjoyable thanks to a reduction in janky mechanics.

I love the new tools and techniques that Aloy gets and learns throughout her journey, be it gliding in the air or exploring underwater ruins, or even mounting new types of machines. You can even tag different parts of the fearsome dinosaur-like machines now, and the in-game codex offers much more insight into various strategies you can pick in combat. Speaking of combat, the skill tree has received an incredible overhaul, making it much deeper and more rewarding, with similar classes like the first game. A new mechanic, called Valor Surge, allows Aloy to execute Mortal Kombat-like power moves that can turn the tide in battle, although switching between the different, unlockable surges is a little cumbersome. There are smaller problems in combat, particularly with animations, as sometimes they can take a little too long, resulting in Aloy getting stun-locked by faster machines. In general, I felt that the combat was also harder this time around, even on the ‘Normal’ and ‘Easy’ difficulty modes. The weight of that falls hard on your shoulders on the sequel’s bigger and bolder boss battles, which feature impressive creature designs that represent the perfect marriage of Guerrilla’s talented art and technology teams.

Thankfully, to that end, the large amount of accessibility options means you can fine-tune your experience just the way you like it. These include adjusting individual audio levels for different elements and an option for gyro aiming (Reddit is happy!).

Horizon Forbidden West releases tomorrow and I haven't finished the game yet. However, I have used the time to make use of the pretty sweet photo mode on PS5.

The game comes in two different, native versions for the PS4 and PS5. I played the game on the latter, which offers two graphics modes:

The PS4 Pro version runs at the same 1800p as the PS5’s performance mode, except capped at 30fps, although at with much-reduced model detail. The base PS4 is the same, dropping the resolution to 1080p while using dynamic resolution scaling. This shows that Forbidden West is an immensely scalable game, with the PS5 version equivalent to an “Ultra” graphics preset on PC, whereas the PS4/Pro is left at “Low”.

There are no options for ray tracing here, but that doesn’t mean the game isn’t pushing the PS5 to showcase its beautiful world. Textures are sharper, the lighting is noticeably more pronounced (thanks to a hero light that follows Aloy, only reserved for cutscenes on PS4), and the sheer amount of geometric detail is quite honestly overwhelming. I played the game alternating between both modes, although sticking with 60fps for the most part. The drop in resolution is extremely noticeable, especially on things like foliage, but if you’re playing it on a 1080p display that may not be as visible. All of its beautiful detail gets exponentially amplified the moment you turn on the photo mode, which is also excellent here, and I imagine fans will take it for a ride for the many months and years following the game’s release.

As is usual with the PS5, the DualSense controller is also put to good use, with the use of haptics and adaptive triggers adding a new level of immersion. Even the subtlest movement like hiding in long grass, swimming underwater or prying open a canister for loot provides unique vibrations. Forbidden West’s much higher production value is on full display on the PS5, with a gigantic scope that compliments the amount of pixel power the console can render. It’s not just sharper pixels, but also the breadth of variety in colour in its different landscapes that adds so much, especially if you’re playing in HDR.

Of course, the PS5 version also includes enhancements like faster loading and 3D audio. The former is fast enough depending on the distance you’re traveling in the world, ranging from under 2 seconds to around 6. It helps a lot in the heat of a tough fight, as getting back in is made much more convenient. It also helps in completing side missions on other ends of the map, as traversing the world and waiting a while can kill the rush. The 3D audio is also quite noticeable, expanding the soundstage of Horizon’s world. I could hear events much further in the distance, and the modulation of sounds in different environments like underwater or in caverns adds a great sense of depth. It also puts performances front and center, and with so many characters, including NPCs from side-quests now having bespoke voice work put into them, it only makes the world better.

Given the game has a vast open world, it’s natural to expect bugs and glitches, but aside from a few visual oddities like pop-in and odd texture filtering, I never ran into anything game-breaking. The game did crash on me once, and the underlying issue may have already been fixed with a patch that went live on the day of release.

Also, note the PS4 version of the game offers a free upgrade path, saving you 20% of the asking price of the PS5 version alone, both on physical and digital store shelves.

Horizon: Forbidden West PS4 to PS5 free upgrade is now listed on the store page, applies to both digital and physical editions of the game.

Remember to buy the PS4 version to save Rs. 1000/$10. Pre-load is now live.#HorizonForbiddenWest pic.twitter.com/yvcZB1BdTv

Horizon: Forbidden West is an absolutely gorgeous game that builds upon Guerrilla’s foundation with a gargantuan scope, with deeper gameplay and story, especially soaring high on the PlayStation 5. This is a gold standard for sequels, and if this is just the edge of the cross-gen territory, I can’t even begin to imagine what the future of the PS5 holds when games start taking full advantage of its hardware.

Horizon: Forbidden West is out now on PlayStation 4 and 5 consoles. There is no PC release announced at the time of writing.

Uncharted Is a Good Time, but Not Good Enough for PlayStation