The Halo franchise has taken an important place in pop culture for over 20 years now, starting with the launch of the eponymous game alongside Microsoft’s original Xbox console. Since then, the franchise has seen over 6 mainline games along with various spinoffs, including books, all expanding its universe. The upcoming Halo TV series has a big problem to tackle then— how do you take a franchise with a legacy that big, crafted in another medium, and translate that into a completely new, beginner-friendly version for a passive medium?

The new series had been in development hell for almost a decade now, spanning the entire length of the Xbox One console generation. Now, the 9-episode series will release on March 24 worldwide (on Voot Select in India), and I was given the opportunity to watch the first two episodes early. So, does HALO: The Series live up to the legacy of the games, even with the creative license to change things? Well, to put it simply — this ain’t it, chief.

The series is set in the ‘silver timeline’ — a fancy way of saying it’s an alternative timeline from the games. This means that while it contains the same basic settings, characters and backstories, the show will diverge from the games in the way that it propels its narrative forward. This becomes apparent by the end of the first episode, with the second episode making it clear that this isn’t HALO as you know it.

Note: This preview won’t contain any major spoilers for the show.

Starting off on the outer colony planet Madrigal, teeming with insurrectionists as seen by the United Nations Space Command (UNSC), we see a group of Covenant aliens attack its base of operations. In amidst the chaos, we’re introduced to Master Chief Petty Officer John-117 and his Silver team of Spartans as they attempt to save the colony. The origins of the Spartan program created by the UNSC have always been dark in the games, but it’s the first time we’re seeing it in action this close. We see these ‘insurrectionists’ shoot both at their saviours as well as the scary invaders, fueled by the offscreen political history between the UNSC and the outer colonies.

It’s a great set-piece that introduces both the Spartans, the Covenant, and the people between them and their motives. From here, we slowly get introduced to both the UNSC’s key people, including Dr Halsey and Miranda Keys, as well as the Covenant’s base of operations — the High Charity, along with the various ‘Prophets’ as its rulers. That’s a lot of terms and dynamics that the show throws at unaware viewers within its first 20 minutes or so, but I think it’s all done well enough. The character interactions are enough to give you a good idea of where each one’s motivations and loyalties lie.

Pablo Schreiber’s Master Chief will instantly hook everybody to him in this opening sequence, and everything from his voice to his movements is a nice reminder of the games. Of course, Chief’s new voice takes some getting used to, and his demeanour as the show progresses will also take many longtime fans by surprise in many moments. While not as reserved or stoic as Steve Down’s Master Chief from the games, Schreiber’s version comes off quite accurate while including some quirks of his own. In the games, Chief only speaks when he needs to, and there’s an aura of mystery surrounding him that can be adapted into any situation. In the show, Chief is a little less ‘showy’, and he even cracks a joke early on that gave me whiplash. 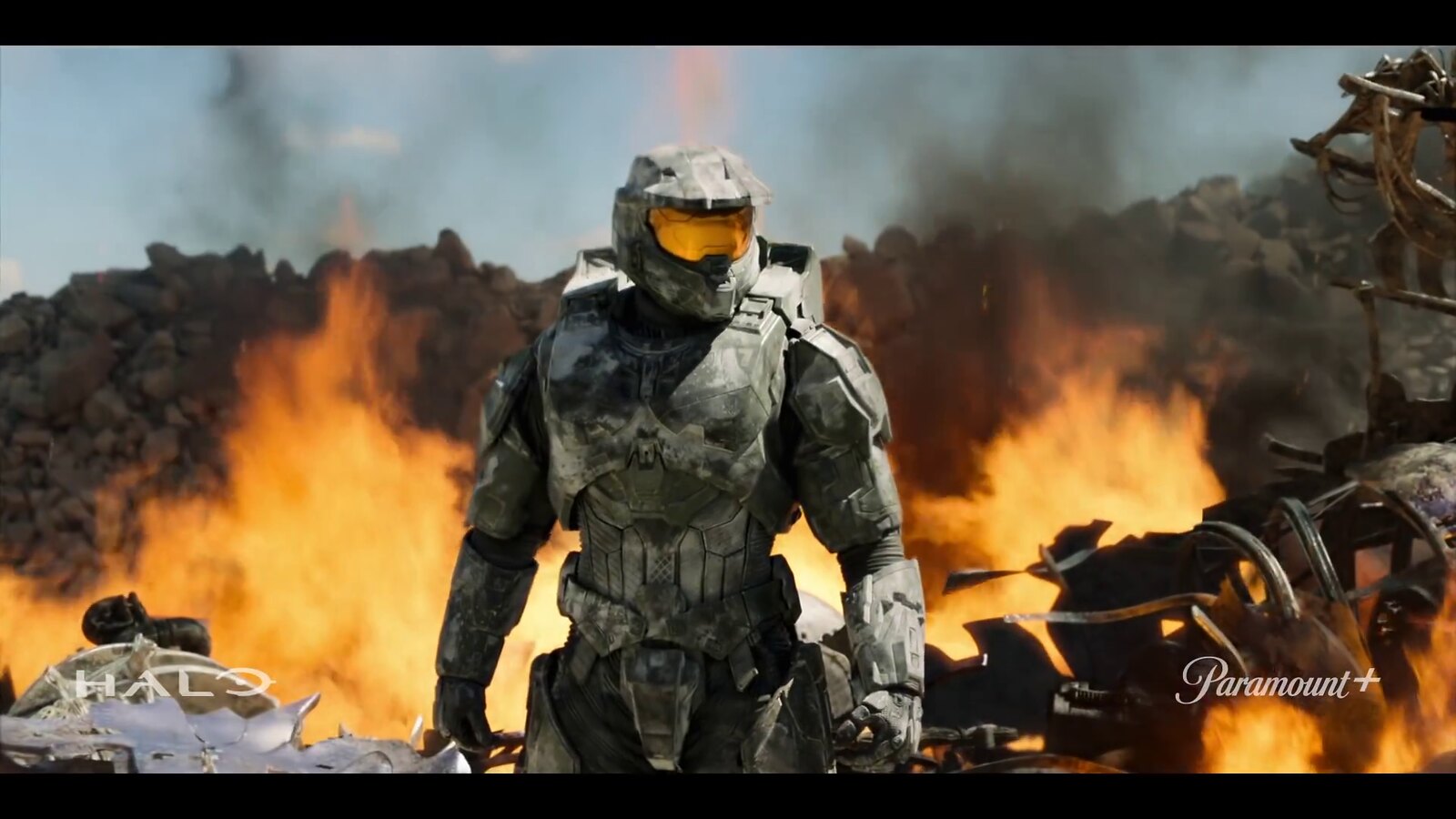 There’s a lot to talk about the final moments of the series premiere and some decisions taken after that may be considered major spoilers. However, considering that executive producer Kiki Wolfkill has already publicly stated it, I’m going to talk a bit about the big elephant in the room — Yes, Master Chief does take off that sweet helmet in the show. It’s a big change for the franchise’s legacy, seeing as we’ve never really seen the man behind the armour in over 20 years. Sure, we’ve got small teases to it in some special after-credits scenes and in various books/comics, but it has never been the main focus of any story featuring the Chief and Cortana. Even Halo Infinite, which I consider to be Master Chief’s most personal story in many regards, doesn’t break that unwritten rule. So, to see Pablo’s face being given prominence in the show is quite a weird surprise. However, to be honest, I’m not a fan of this decision, both in its ideation and its execution. Nothing that John-117 says or does with his helmet off requires that helmet to be off. I’ve honestly seen more emotion from the video game version with his helmet on than I’ve seen from Schreiber’s portrayal in the first 2 episodes. Am I being unfair? Maybe, but the creatives in charge knew that this decision might not sit well with the fans, especially if it doesn’t feel justified. Who knows, maybe the latter episodes will dive deeper into reasons that really make sense for this change, but right now it mostly feels like it was done to show more of the leading star’s face. We just saw The Mandalorian successfully navigate around this ‘problem’, where we only saw the star lead Pedro Pascal’s face thrice across two seasons.

Alright, let’s focus on the other characters here. Everyone that has played the games knows just how important Dr Halsey is to the lore of the series, being an anti-hero of sorts who created the Spartan-II program for less than heroic purposes. So how does Natascha McElhone fit into the well-established role? Quite well I would say. Halsey was always an important part of the series but for the most part, her role was relegated to off-screen exposition. Here, she’s front and centre when it comes to anything related to the UNSC. Her rebellious nature against the higher-ups in the chain combined with her intelligence makes for a complex character and, while I’ve only seen a small part, I think McElhone is going to be one of the show’s stronger parts. Complimenting her is Olive Gray as Miranda Keys who does a fine job on her own, keeping the spirit of the beloved character alive. Directly above Halsey is Admiral Margaret Parangosky (Shabana Azmi) who, to be really honest, comes off a little stiff in the show. The generic writing doesn’t do her any favours, and for a role that we’ve seen time and again (the ‘do not question your superior’ type), I was really hoping we’d see an edge to her. Then again, maybe that comes later in the show.

To round out the cast we have Bokeem Woodbine as Soren, who is close to being one of the Chief’s most trusted companions. Woodbine brings a certain warmth to the character, contrasting well with the Chief’s cold nature. At least that’s how the writing is supposed to be but I never really feel that contrast to be as extreme as the show believes it is. This is mostly down to Schreiber’s performance that flip-flops between what everybody believes him to feel which is apparently nothing, and how he actually feels. I get that the dichotomy between those conflicting emotions is a big part of the emotional arc that Chief is supposed to go on, but I’m not sure it comes off as well as the creators hoped it would.

And then, there’s my least favourite part of the show yet — a new teenage character Kwan Ho, who the Chief takes under his wing after she turns out to be the only survivor of the attack that opens the show. It’s a role that’s all too familiar, and that’s why the lack of originality in the writing sticks out like a sore thumb. Oh, she doesn’t trust Chief? Wait, now she does after she sees Chief commit acts of heroism that flips her perception of the UNSC? Wow, never saw that coming! None of this (well, for the most part) is the fault of newcomer Yerin Ha who plays the role just as well as she probably can. It’s the writing that’s at fault here, and I’m just tired of seeing the same story beats play out in different movies/shows over the years..

Some words on the High Charity — just like the rest of the new characters, Charlie Murphy’s mysterious character Makee, who sides with the Covenant for her own undefined goals, feels one-note. There’s enough mystery there to build something great, and we see glimpses of that in the second episode. But just like my other issues, I’ll just have to wait and see how that pans out.

Being a relatively ‘high-budget’ series, the VFX and production design can be spotty at times, but for the most part, gets the job done. The alien designs of the Covenant elites and the Prophets are all great, but when it comes to worldbuilding through sets, the show fails. Every time I see characters walking through the UNSC command base in Reach, or through any of the new locations, I only see them for what they are - set dressing. It doesn’t necessarily feel like there’s a world outside those rooms, and the choice of lensing and aspect ratio throws off the sense of scale that the show is trying to achieve. Sure, the Mjolnir exo-suits that the Silver team wears look awesome despite somewhat muted colour tones, but everything surrounding them feels like a higher budget version of a decent fan film. For those curious, no we don’t get any sweet warthog action in these first two episodes, but they’re there and I hope to see them put to good use later.

Most of this review may come across as me being whiny, but when you take over half a decade to adapt a source material so rich with potential and squander it with dumb, generic writing, I think most sensible people have the right to critique it and point out the obvious flaws. HALO has already got an order for a second season, and I want that second season to iron out the kinks. Actually, I hope the rest of season 1 itself will answer most of my complaints, although I don’t expect it to.

The opening episodes of HALO set the stage for a vastly different interpretation of Master Chief’s adventures, which might make for passable sci-fi TV but not satisfactory for longtime fans of the games.