Dawn of Ragnarok is the third and final expansion for Assassin’s Creed Valhalla, which is a first for the Ubisoft franchise in getting new content well into its second year. The game, released back at the tail end of 2020, has received a lot of updates ever since it came out with many quality of life improvements alongside new quests and game modes. Following Wrath of the Druids and The Siege of Paris adding new adventures for Eivor, the final expansion Dawn of Ragnarok instead focuses on the mythical sections of the base game where you play as Odin.

Following the events of the base game, Dawn of Ragnarok sees Eivor slipping back into Odin’s memories as he travels to the fiery Muspelheim to rescue his son Baldr from the evil fire demon Surtr. Remember when Assassin’s Creed was rooted in science? Boy, that escalated quickly! Of course, pretty much all of the new interactions here do have well-founded reasons in the game’s lore attached to them.

Ubisoft has touted Ragnarok to be the franchise’s biggest expansion yet, though I put it pretty close to Assassin’s Creed Odyssey’s Fate of Atlantis expansion. Compared to that, the map here feels slightly bigger, and the number of gameplay additions is staggering. The new expansion includes a completely new set of abilities to gain and use in different scenarios, including combat, stealth and exploration. Some of these reminded me of the Middle Earth games, and Muspelheim’s aesthetic isn’t far from Tolkien’s hellish worlds. 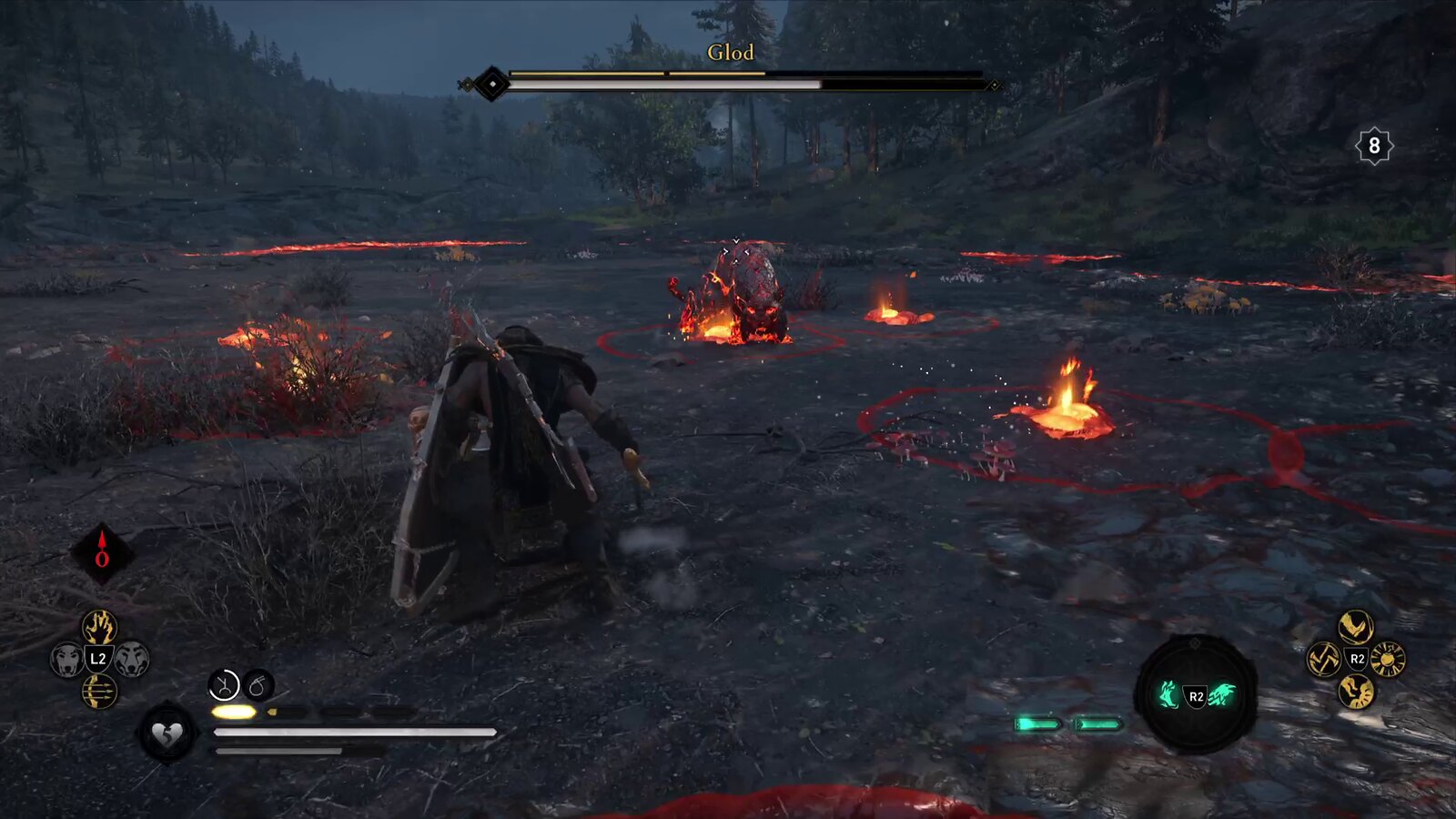 The core of these new abilities, existing on top of your existing abilities that can be used with the triggers and face buttons, grants Odin the power to absorb skills from his foes. This is all thanks to a new tool in the DLC known as the “Hugr-Rip”, which has its own ability/skill tree. These include changing disguises to a Muspel to run across lava, a Jotun to teleport across areas, and even turn into a raven himself to traverse the landscape. But what’s interesting here is that the level design itself in the expansion has been adapted to make use of these abilities. You will have to use these abilities from time to time, and you’ll be switching between them quite a lot. It makes for some cool moments of puzzle-solving, sneaking around and trophy hunting (or achievements on Uplay/Xbox). On top of that the new raven ability, in true modern Assassin’s Creed fashion, depreciates any use of parkour when it comes to large bodies. Now when you’re riding in the terrain and see sync point on top of a huge mountain, you can just turn into the raven, fly to the top in a matter of seconds, and not lose precious time awkwardly climbing it.

The base game boasted the widest variety of enemies in any AC game to date, and Dawn of Ragnarok expands on that. More supernatural in nature, the new enemy varieties will give Odin a tough challenge unless you’re either a) over-levelled or b) playing on ‘easy’ difficulty. I played the game on the ‘normal’ difficulty mode but I was quite over-levelled from the start. To that end, I never felt challenged in combat and was easily clearing camps, destroying Jotuns and Muspels and kicking Surtr’s (and his allies’) ass.

Of course, being still derived from Valhalla’s base assets, there is a lot of janky stuff to be found here, including some funny but not game-breaking bugs. In one mission I had to carry an NPC from the top of a mountain to the ground, and my genius solution was to just throw him off the side a few hundred meters at a time. Surprisingly enough, it worked! There are tons of examples like that where it feels like there was no QA time devoted to the expansion. The same goes for presentation, where many hard-hitting moments lose their vigour because the background music wouldn’t kick in, or sound effects like room tone and ambience would be absent, making the already robotic cutscene animations look even more inhuman.

A lot of the “new” activities are essentially re-skinned versions of the same found in the base game, such as river raids and bandit camps. The only difference here are the rewards which are more era-appropriate in line with the Norse myths, with normal enemies replaced with their supernatural predecessors.

What about the story then? It feels like in recent years the concept of Ragnarok (along with the whole of Norse mythology) has been quite overused in pop culture. We had the insanely entertaining Thor: Ragnarok, then we saw some similar beats in Hellblade, and of course, we’re getting the highly anticipated God of War: Ragnarok this year. To have yet another game centred around similar themes feels overkill, especially with the expansion tying directly to the end of the Norse world. Of course, there is lore that washes over the facade of “Ragnarok”, which in reality was the end of the Isu era with a catastrophic solar flare. While it’s in the name, the event itself has little to do with the expansion, instead set in the backdrop as an offscreen ticking bomb that has no impact on player agency.

Odin’s quest to bring Baldr back from Muspelheim will see him meet new allies and foes, some of whom are recognizable from Norse myths. This includes the dwarves Brokkr and Sindri (who were also present in 2018’s God of War), some valkyries, and Surtr’s extended family. Some of these have interesting quirks with the occasionally memorable quest, but for the most part, can be quite unremarkable. By the end of the expansion, which took me less than 10 hours to complete as I was overpowered, I was left a little disappointed with the lack of concrete meta-story progression. There is no link to the modern-day story either, which was personally my favourite element of the base game with where it left off.

Assassin’s Creed Valhalla: Dawn of Ragnarok includes new abilities, activities and a large map that will satisfy fans who want more of Valhalla, but if you’re looking for something significantly new or innovative then you may be disappointed.

Dawn of Ragnarok is available on PC, PS4, PS5, Xbox One and Xbox Series S|X consoles as a standalone purchase as well as a part of the Ragnarok edition which includes the base game.

HALO Episode 1 and 2 Review: This Ain't It, Chief

Morbius Review: A Desperate Attempt at a Disparate, Incoherent Spiderverse