Sony has finally launched its new and improved PlayStation Plus service in India, with a three-tier system and hundreds of new games asking both old and new players to welcome it with open arms. But is adding more to what was once a basic subscription service worth it? And what value is the new service for gamers in India, considering the compromises on features from its international variants? Here’s what you need to know.

First up, the basics: PlayStation Plus is now available in three tiers as follows-

Sony has officially discontinued its older PS Plus gift card vouchers at retail in the country. In its place are the new PS Plus vouchers available at retail in the country, which are only directly available for select tiers. If you want to redeem monthly subscriptions for lower tiers without entering card details on PSN, you’ll have to make do by adding funds to your PS account with wallet top-ups.

Disclaimer: Sony India provided a voucher to redeem three months of PS Plus Deluxe for review.

As for the features and services, here’s the breakup: 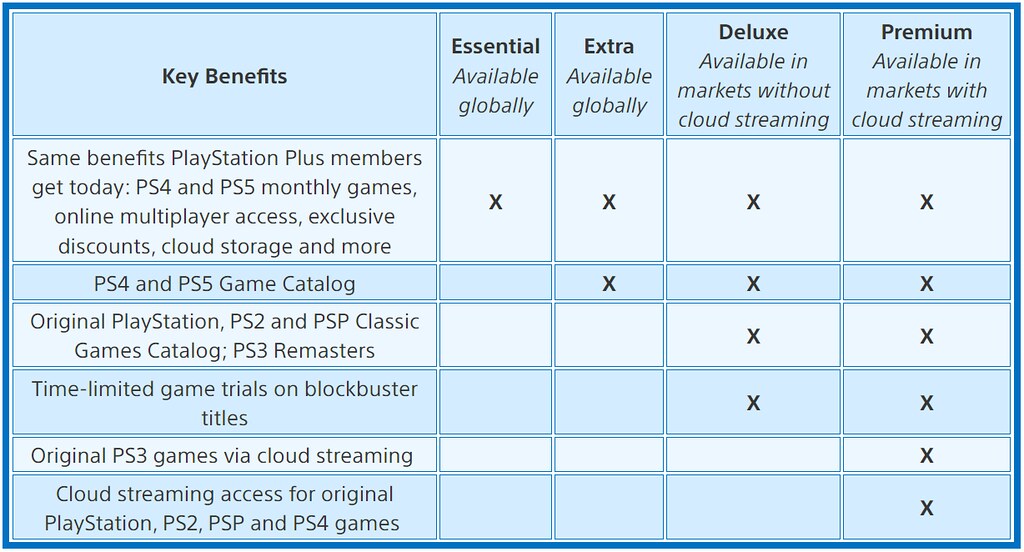 It’s been well documented how PS3 game streaming is skipping India due to Sony’s lack of streaming infrastructure (or the now-defunct ‘PS Now’ service). So to make up for it, Sony is offering the ‘Deluxe’ tier instead of the ‘Premium’ tier found in the US, which cuts down on cost. If you want something to tickle that Excel sheet itch, then Gadgets360 has you covered. What I want to talk (or write) about is the value of the collection of games offered here.

Primarily, it’s the Game Catalogue that is of interest to me here. Here’s a preliminary count of all the games in the new PS Plus : 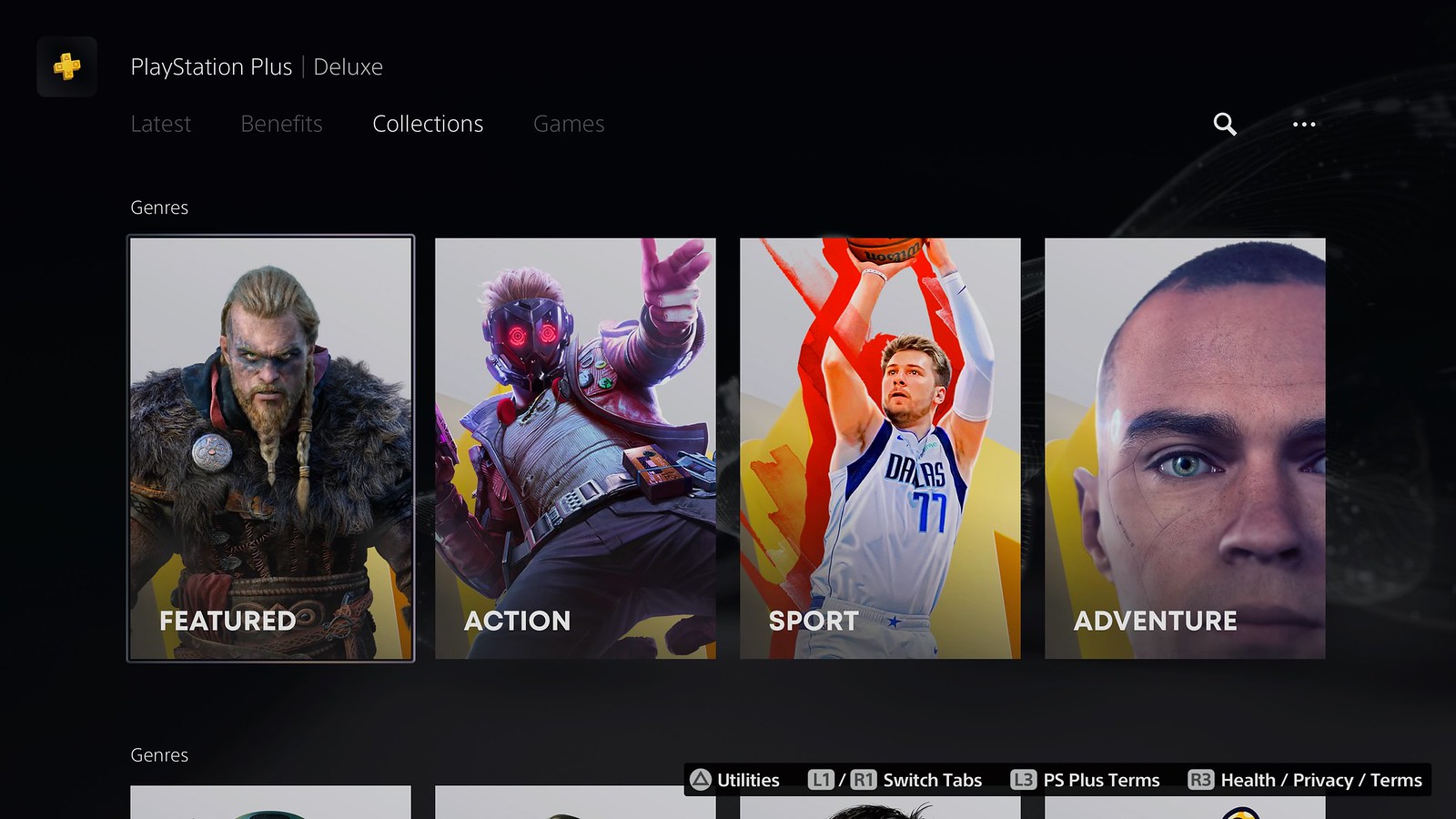 All told, that’s a lot of games. I won’t be comparing the service to Xbox Game Pass here, but it looks like PlayStation finally has an answer to Microsoft’s big bet for this new console generation. PlayStation boss Jim Ryan has already stated multiple times how releasing first-party games on day one on the service will be detrimental to Sony’s games business strategy. For more than a generation, Sony has relied on the tried and tested exclusive strategy of funding high-quality, expensive AAA games from its studios. Sony was also the first to publicly announce the price increase for its first-party games for PS5, with new releases priced at $70/Rs. 4,999. For that price, you can now get an annual subscription to PS Plus Extra, which I think is the most valuable tier, despite the minor price increase for the Deluxe tier.

Even though the service won’t see day-one first-party releases, for the time being, Sony is clearly happy putting some of the biggest PS5 titles on it. Both Spider-Man games, Returnal, and Demon’s Souls comprise some of the biggest platform sellers, and they’re all available on the service. It looks like the earliest a first-party PlayStation game will make its way to PS Plus is at least one year from release, as inferred from Ghost of Tsushima: Director’s Cut being the latest game by release date on the service. That’s ample time for games to sell at retail for full-price/usual discounts before being made available “for free”, and should be more than enough for Sony to recoup investments, or at least make good projections for the same. However, there will be new games added to the service day and date, with the first being Annapurna Interactive’s much-awaited cat-game Stray.

So, what have I been playing thanks to the new PS Plus? Well, for starters I wanted to check if save files would transfer over to the PS Plus version of those games. If you’ve been a PS gamer for long, you’ll know that Sony locks save transfer between physical and digital versions of games, with PS Plus monthly games treated as a different version. There was the whole debacle of not being able to get the free next-gen upgrade for the PS Plus version of Final Fantasy 7 Remake (which was fixed later). More recently the PS Plus version of Resident Evil 7 couldn’t be upgraded for free to the next-gen version. While the new PS Plus’ game catalogue includes both PS4 and PS5 versions of many games, you still can’t carry over your prior progress from versions you’ve purchased.

Wait so there's no way to use my prior save data (from disk version) on the PS Plus version eh? That's a bummer. pic.twitter.com/PFdlhFTkML

Anyway, I wanted to jump in and try out the classic catalogue, but currently, the PlayStation Store only offers the PAL version of games in the service. Meaning — those versions were designed for running at 50Hz, meaning you’re locked to 50fps instead of the current standard of 60Hz. As a result, those games literally run slower as their physics systems and mechanics were tied to their frame rates. PlayStation has confirmed that NTSC versions will also be making their way to the store at a later date, which is why I won’t be playing any of the classic games on the service for the time being. It’s worth noting that classic games do offer some additional functionality like adding visual filters and the ability to rewind the game in real-time if that’s something you’re into.

So, after trying out a little bit of Toy Story 2, Ape Escape and Syphon Filter, I diverted my attention to PS4 games I had missed out on. Of course, these games look and run exactly the way you’d expect them to. I downloaded Marvel’s Spider-Man: Miles Morales to try out its 120 Hz modes, and given how well it works I hope more developers take note. Then, I started the sleeper hit Deliver Us The Moon which now has a native PS5 version. Finally, I landed on completing my games wishlist of installing the OG Final Fantasy 7. I loved my time with the remake (after realising the impact of its genius twists), and going back to the 1997 JRPG feels comforting. But there are some weird quirks with the game selection.

Why not include certain classic PlayStation franchises like Sly Cooper and Metal Gear? Why include the PS4 version of Spider-Man, but not the PS5 remaster. As for classic games, they’re currently offered as both PS4 and PS5 native apps, so you can download the PS4 version to play from your external hard drive. The ‘PS5 versions’ of classic games will need to be installed on either the console’s internal SSD or on the optional M.2 slot. The only difference? The PS5 apps are a little more compressed, that’s about it.

That’s about it as far as initial impressions go. So, back to the question posed in the headline, is the new PlayStation Plus worth it in India? While I’ve only tried it out for less than a weekend, I think yes, it is. The pricing structure only makes sense from a value perspective if you’re taking an annual subscription, something that I suspect most gamers in India were taking up anyway. While the game library isn’t as big as found internationally, it’s still extremely competitive with that of Xbox Game Pass. The presence of big hitters like Returnal, Spider-Man, and a lot of the PlayStation’s past exclusives makes it worth the investment for any new gamer getting their PS4 or PS5 console for the first time. While backwards compatibility with older generations is nowhere close to Xbox, it’s a start from Sony to preserve some of its classics. In time, I hope to see more of those games added to the service, and bringing PS3 games to India is a must, be it through streaming or through hardware emulation.

Every Cool Game I Tried at Steam Next Fest 2022

PlayStation Plus vs Xbox Game Pass in India - What's the Better Value?